Numerous comparative studies have proven that discordance between plasma and tumor variant calls can be attributed primarily to tumor heterogeneity and temporal differences between the collection of tissue and plasma. However, these studies did not examine the technical variables of different assays. The team at AstraZeneca tested four NGS assays for mutations in circulating tumor DNA (ctDNA) using replicate sets of 24 plasma samples and compared the results with matched tissue pair results from two NGS vendors. The four vendor names were blinded in the study so that the scientists could focus on factors affecting discordance. Critically, all variants called by other vendors below 0.2% allele frequencies were false positives. 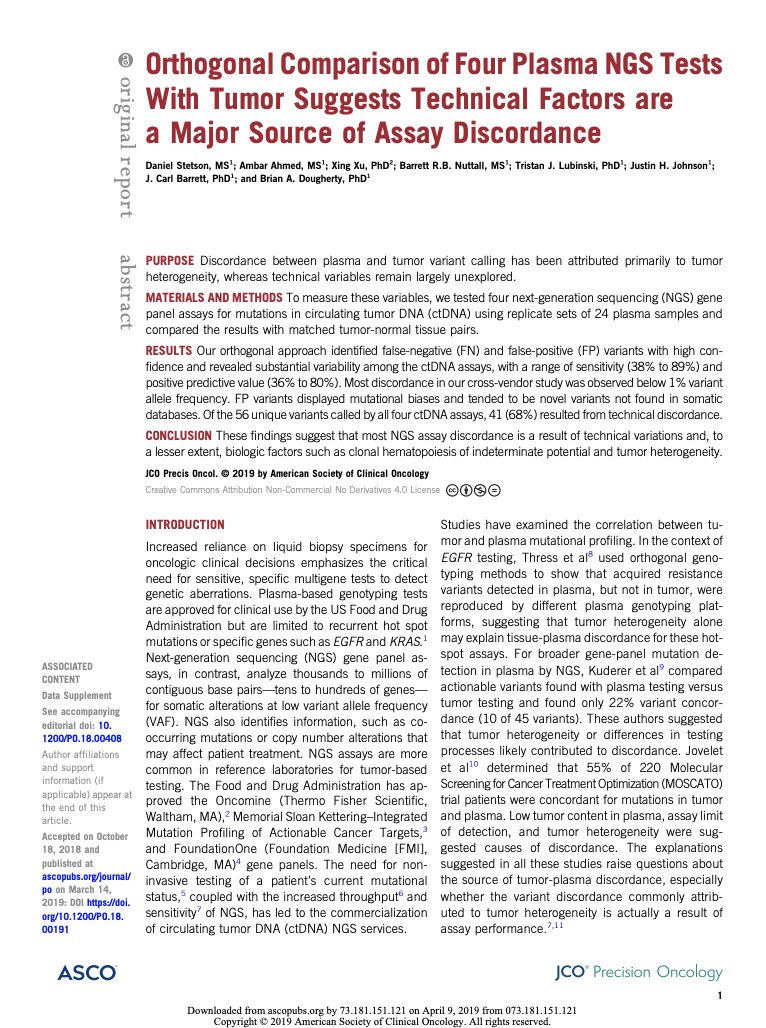 “Clinicians and patients need diagnostics they can trust. Marketing claims of ultra-low sensitivities need to be backed up with real-world clinical data, not with hypothetical calculated limits of detection. From a clinical perspective, false positives should be disconcerting,” said Mark Li, CEO of Resolution Bioscience. “We are willing to reveal that we were Vendor B in this study, and we encourage other test manufacturers to publicly own their results. We stand behind our products today and we are committed to continuing to improve them as part of our ongoing mission to help transform the way cancers and complex diseases are diagnosed, treated, and monitored.”

According to the AstraZeneca team, the study findings suggest that most NGS assay discordance is a result of technical variations and, to a lesser extent, biological factors. Resolution supports further comparative studies to highlight the differences between assays and technologies for detecting all four major types of mutations. This AstraZeneca study looked at the easier-to-detect single nucleotide variants and indels. In another recent study presented at the American Association of Cancer Research Annual Meeting last week, researchers at the Dana-Farber Cancer Institute used Resolution’s ctDx technology to detect more gene fusion mutations with higher allele frequencies than the Guardant360 test.

About Resolution Bioscience
Resolution Bioscience is a privately held company dedicated to developing a highly sensitive, non-invasive liquid biopsy platform that improves cancer diagnostics and monitoring for patients around the world. The company has developed and patented core technology for circulating cell-free DNA NGS analysis and was the first to demonstrate identification of all four major types of mutations in a blinded, clinical study. The company is based in Kirkland, WA. For more information, visit www.resolutionbio.com